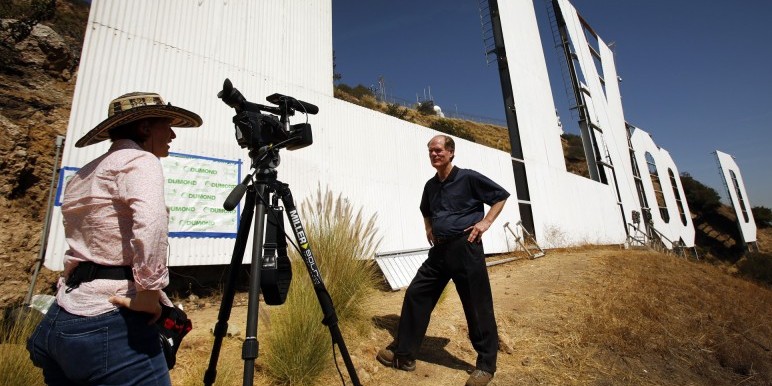 Photo by Allan Schaben of the LA Times

I’m a video journalist for the Associated Press. I cover breaking news across Southern California and the West for video and the wire, while dreaming up original story ideas and collaborating with print reporters on cross-platform packages.

I used to hold down the LA desk in the evenings, churning out wire copy. When I could escape the confines of the bureau, I shot wildfires and mudslides, produced at the Sundance Film Festival and dreamed up lifestyle and business story ideas. Finally, AP’s broadcast unit realized I had to be set loose and I soon made the leap to being a full-time Video Journalist.

My first love was radio. I worked as a producer for National Public Radio, news/talk commercial stations, and reported for local stations. My favorite local public radio newsroom was New Hampshire Public Radio, where I often freelanced for NPR’s newsmagazines, On the Media, The World, Studio 360 and Marketplace.

Raquel Maria Dillon behind the mic in the studio at New Hampshire Public Radio, 2004.

As a student at UC Berkeley, I produced a half-hour news magazine about religion that won a 2007 Student Emmy, freelanced short, non-narrated features for Current TV, and practiced my stand-ups (all while working part-time at KGO Radio and the Santa Rosa Press Democrat).

I will always get excited about breaking news, but the stories I’m drawn to most are about scientific research, technology, aerospace, environmental and natural resource issues, agriculture, fish, farmers, Latin America, the US-Mexico border, rural America, culture, families, universal human values and emotions, and breaking news. I continue to develop as a reporter and storyteller through training opportunities like the National Press Photographer Association‘s Advanced Storytelling Workshop, the Institutes for Journalism and Natural Resources fellowships, and SoundVision Productions’ science literacy workshop.

I grew up on a New Jersey cul-de-sac and now live in Los Angeles. I built this website myself (with a little help from my brother).